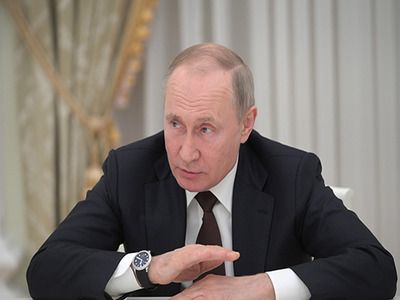 Fuel and energyOilMinistries and departmentsEvents
OREANDA-NEWS. On April 3, Russian President Vladimir Putin will hold a videoconference meeting with major Russian oil companies and discuss the situation on the oil market. This was reported to journalists by the press secretary of the head of state Dmitry Peskov.

"Another important event is planned for him during the day. This is a meeting on the situation in the global energy markets", Peskov said. There will be government leaders, presidential administrations, profile leaders, as well as our main oil companies - the leaders of major oil companies". The Kremlin representative added that in the same format, the president had already met on the eve of his trip to Pskov on March 1, "before the OPEC+ deal was broken". “The reason for this meeting is clear”, Peskov added.

Speaking about the reasons why Putin is going to hold a meeting on oil issues on Friday, Peskov recalled that the Russian leader had previously discussed the situation on international energy markets with international partners, including US President Donald Trump.
Source: OREANDA-NEWS
Материалы по теме: