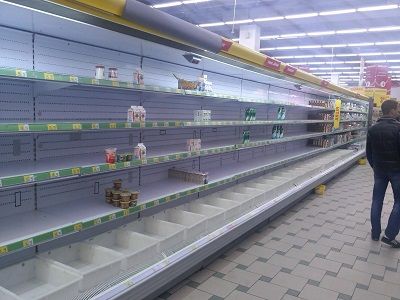 Russians are Afraid of the Food Crisis Beginning

OREANDA-NEWS The ban for the retailers to return products to suppliers could cause a shortage in the weekend.

In January of this year, 30 deputies headed by Irina Yarova developed a bill according to which retailers are prohibited to conclude contracts in which there is a condition for the return to the supplier of goods not sold after the expiration date. Parliamentarians motivated such a ban by increasing the number of returns. In the segment of bread products, this figure reached 50% of the total supply, in the segment of meat products – 30%.

According to the authors of the bill, the practice that they want to limit, causes economic damage to the manufacturer and violates the interests of the buyer, "because any loss of the manufacturer — a decrease in quality in the future, because the losses are forced to change production, reduce the range, increase prices," said Vice-speaker of the state Duma Yarovaya.

In August and September, the Federal trade networks sent a response to the document to the State Duma and the government, which outlined the possible consequences of the introduction of the proposed deputies rules to prohibit the return of products to suppliers.

As explained by Belyakov, retailers expressed concern that such a step creates a risk of "inability to purchase products in certain hours of trade, especially on weekends." The matter is that on Friday suppliers deliver products at once for three days. Having lost the opportunity to return the goods, the network will begin to reduce the order, and with a jump in demand, most of the products can be sold on Friday or Saturday.

Products with a shelf life of up to 10 days occupy about half of the retail space in supermarkets.

The press service of the Ministry of industrial trade reported that repeatedly opposed excessive regulation of the trade industry.

According to the Ministry, before the adoption of the project in the second reading, it is necessary to conduct a full procedure for assessing the regulatory impact.