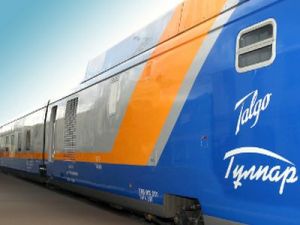 OREANDA-NEWS  September 26, will be the launch of high-speed trains "Tulpar-Talgo" on the new routes: "Astana-Uralsk" and "Almaty-Uralsk".

We remind that in order to simplify the procedure for the passage of high-speed trains across the state border, which were transited from the territory of the Republic of Kazakhstan through the territory of the Russian Federation without conducting control procedures, amendments and additions were made to the "Agreement on the Specifics of Legal Regulation of the Activity of Enterprises, Institutions and Organizations of Railway Transport dated October 18, 1996 ".

Time in the way of the train will be reduced by 13 hours (from 39 hours to 26 hours). The stop is at the following stations: Astana, Atbasar, Yesil, Kushmurun, Tobol, Ayitekebi, Nikeltau, Aktobe, Kazakhstan and Uralsk.The train "Almaty-Uralsk" will depart from Almaty-2 station on September 26 at 20 hours 17 minutes. Arrival at the station of Uralsk - September 28 at 10 hours 37 minutes.

Each train is made up of 27 "Tulpar-Talgo" wagons of Kazakhstan production, 2 of them are "Grand" class cars, 2 "Business" cars, 18 compartment cars, 3 technical wagons and 2 dining cars (car-bar). In the wagons all the necessary conditions for passengers, including those with disabilities.