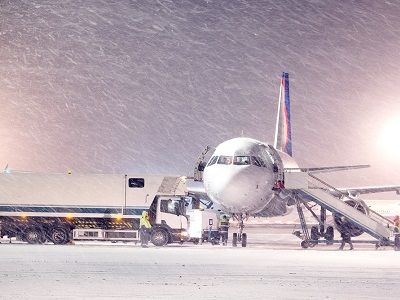 More Than 40 Flights Cancelled and Delayed In Moscow 's Airports

OREANDA-NEWS  The Moscow airports work in a regular mode, despite the adverse weather conditions. About TASS reported the press service of the airport.

"As of 12:00 visibility at Vnukovo airport is 2.8 thousand meters, the lower edge of the cloud-240 m. Provides a good coefficient of adhesion of the wheels of the chassis with the runway-0.42. The airport operates in the normal mode, all the necessary procedures are performed to ensure the safety of flight operations. There are no delays and cancellations due to weather conditions at Vnukovo airport", - said the representative of Vnukovo airport's press service.

Visibility in the area of Domodedovo airport is more than 3 thousand meters - this is enough for the timely arrival and departure of flights. To ensure flight safety, each aircraft undergoes anti-icing treatment, with the help of special equipment, taxiways and runways are cleared. "In this regard, there may be minor technical delays of up to 20 minutes. There are no cancellations and delays of flights due to weather conditions," the press service explained.

Sheremetyevo also operates in standard mode during difficult weather conditions. "The airport provides flights for departure and reception. There may be short-term delays associated with the clearing of runways and processing them with reagents," the press service of the airports stressed.

Earlier, the hydrometeorological center of Russia reported that in Moscow on Thursday ice is expected, sometimes strong, snow and not less than three degrees below zero. Atmospheric pressure will be 752 mm Hg. Earlier in the weather center "Phobos" reported that the snow, which began in Moscow the day before, will continue in the afternoon on Thursday, December 13. According to weather forecasts, the city may fall to 10% of the monthly rainfall.