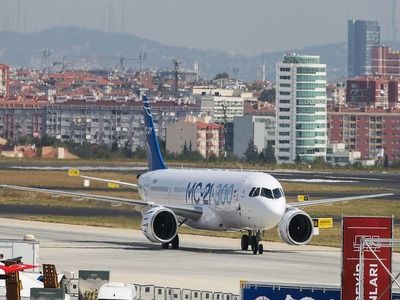 TransportAir transportCars and equipment manufactureEvents
OREANDA-NEWS. Russian medium-range aircraft MS-21 made the first international flight Zhukovsky - Istanbul. The plane arrived at Ataturk airport to participate in the Tekhnofest festival at 13:26 local time, a Russian media correspondent reports from the scene.

This is the first international flight and the first demonstration of an aircraft under development abroad. The first flight of the MS-21 made in 2017, was publicly demonstrated in September 2019 at the MAKS-2019 air show. According to the press service of the developer of MS-21, Irkut Corporation, the aircraft is equipped with a passenger cabin in a two-class layout. In the tail section of the cabin installed test equipment.

After landing on the runway of Ataturk airfield, the aircraft drove into the aircraft parking lot. Here he was met by representatives of the Russian delegation, members of the UAC, Irkut Corporation and journalists. The aircraft commander Vasily Sevastyanov, the co-pilot Oleg Motovin, the head of the navigational service of the Yakovlev Design Bureau Sergey Kudryashev, and the lead flight test engineer, board operator Nikolai Fonurin, descended the ladder to the meeting. Sevastyanov told the Russian media that the flight went well, there were no comments on the plane.

MS-21-300 is an aircraft under development, with a capacity of 163 to 211 passengers, now it is at the stage of certification testing. Certification in the Russian Federation is scheduled for 2020, later it is planned to validate the certificate for the European market. At the moment, three aircraft are undergoing flight tests; during 2019, another aircraft will join them. Also began the production of aircraft, which will be delivered to customers. The package of firm orders for the MS-21 aircraft is 175 aircraft.