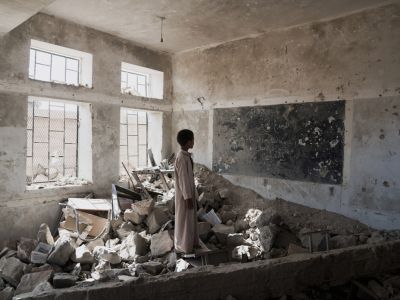 OREANDA-NEWS At the end of a five-day mission to conflict-torn Yemen, the United Nations humanitarian chief on Saturday stressed the need for more funding and better humanitarian access to help the population in need.

“It has been shocking to see the terrible impact of this man-made conflict,” UN Emergency Relief Coordinator Mark Lowcock said in a press release issued by the UN Office for the Coordination of Humanitarian Affairs (OCHA).

“In Aden and Sana'a, and during my visits to Lahj, Hudadydah, Hajjah, and Amran governorates, I have met hundreds of Yemenis, and listened to their stories of atrocious suffering,” he added.

Plunged into civil war between Houthi rebels and supporters of Yemen's internationally recognized Government in 2015, Yemen has faced one of the world's largest humanitarian crisis, including the fastest growing cholera epidemic ever recorded, the world's largest food emergency and widespread population displacement.

Mr. Lowcock, who is also Under-Secretary-General for Humanitarian Affairs, said that the UN and partners have the capacity to further scale up their work but more generous and timely donor financing is needed and all parties must help facilitate and never hinder humanitarians' work.

During this visit, his first to the country since his appointment on 1 September 2017, Mr. Lowcock held frank discussions with the Government in Aden and those in positions of authority in Sana'a on ways to alleviate the suffering of the population and address the challenging operating environment.

In Aden, he asked Prime Minister Ahmed Obeid bin Dagher, among other things, to ensure progress on paying salaries to health workers, teachers and other civil servants, to get Sana'a's airport reopened for commercial and humanitarian flights and to improve the operation of the ports, especially Al-Hudaydah.

In Sana'a, he raised serious concerns about the operating environment facing the UN and other humanitarian agencies.

“I am concerned about the increasing levels of interference in the work of the humanitarian agencies, including delays in granting and denial of visas, delays of essential equipment and supplies at the ports, bureaucratic impediments affecting NGOs and preventing essential assessments of needs so that we can target our assistance most effectively,” he said.

Mr. Lowcock stressed that the end to the horrendous suffering in Yemen requires an end to the conflict, for which a political resolution is needed.

“In the absence of substantial progress on all these points, the already dire situation will continue to deteriorate. The human suffering, already extreme, will grow and grow,” he said.

Despite challenging conditions and lack of funding, UN and humanitarian parties are providing direct assistance to more than 7 million people each month.