The European Commission Announced the Possible Suspension of Schengen Due to Coronavirus Outbreak
State, 25.02.2020, 16:14 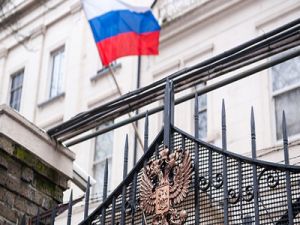 OREANDA-NEWS. Information from Scotland Yard about the identification of the fourth victim in the Salisbury incident, which turned out to be another policeman, isn't credible. This was announced on Thursday by the press secretary of the Russian Embassy in London, who commented on the updated data of the London police on the investigation of the poisoning of the former colonel of the Main Intelligence Directorate Sergei Skripal and his daughter Julia.

“First of all, it is not clear why such an important circumstance became known only a year and a half after the incident. The name of the allegedly injured policeman was not called, although previously the British side was willingly made public the names of those involved in responding to the incident, including police sergeant Nick Bailey. About a “different method” for detecting traces of exposure to a nerve agent, which, however, was for some reason applied only now, for these reasons, and also taking into account the numerous inconsistencies in the past the information published today by the British authorities does not inspire any confidence. We regard it as a new attempt to bring at least some kind of evidence base under the political guidelines pre-determined by the British government", he said.

“Meanwhile, after almost a year and a half since the Salisbury incident, the British continue to stubbornly refuse to cooperate with Russia, keep secret about the state of health and whereabouts of Russian citizens Sergey and Yulia Skripaly, and violate their obligations under consular conventions and legal aid treaties. Obviously, the reason for this behavior lies in the fact that disclosing all the details of this dark history isn't in the interests of official London", the Russian embassy emphasized.

According to the British side, on March 4, 2018, the former colonel of the Main Intelligence Directorate, Sergey Skripal, convicted in Russia for spying for the UK, and his daughter Julia were exposed to the novice fighting substance deposited on the door handle of his house. London stated that Moscow was highly likely to be involved in this incident. Russia categorically rejected all speculation in this regard, indicating that there were no programs for the development of such a substance in the USSR or in the Russian Federation.