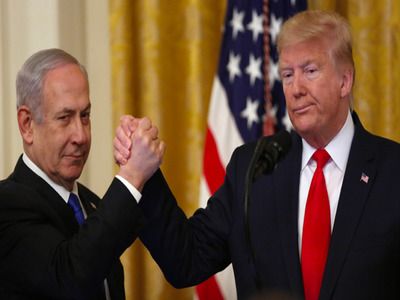 Erdogan Considers Trump's "Deal of the Century" a Plan of Occupation

WorldInterstate relationsInternational activitiesMilitary security
OREANDA-NEWS. Turkish President Tayyip Erdogan believes that the "deal of the century" on the Middle East settlement proposed by US President Donald Trump is an occupation project. The Turkish leader expressed this opinion on Friday during a speech in the parliament of Pakistan.

"The US peace plan for the Middle East is not a project to create peace," the Pakistani newspaper Doon quoted Erdogan as saying. “This is a project of occupation”. "In recent weeks, the US administration has declared this plan a" deal of the century", we have expressed our opinion on this plan of annexation", he added. "We announced to the whole world that we will not leave the Temple Mount to the Israeli occupiers".

At the end of January, Trump at a joint press conference with Israeli Prime Minister Benjamin Netanyahu announced the key provisions of the so-called deal of the century - a plan for a peaceful Palestinian-Israeli settlement, which is based on the mutual recognition of the two states.

At the same time, the US president called Jerusalem the "indivisible capital" of Israel and announced Washington’s intention to recognize Jewish settlements as Israeli territory. As the conditions of the peace process, the American president called the Palestinian authorities’s refusal to support the Hamas radical movement in Gaza, as well as methods of armed struggle. To advance the settlement, the United States is offering $ 50 billion to the Palestinians as an investment.
Source: OREANDA-NEWS
Материалы по теме: