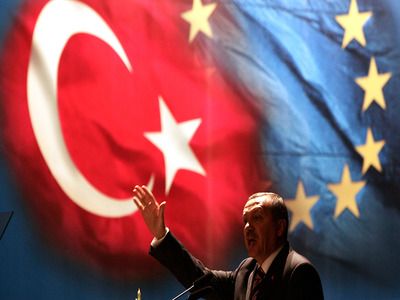 EU Recognized Deadlock Negotiations on Accession of Turkey to the Union

WorldInterstate relationsDiplomatic organizationsEvents
OREANDA-NEWS. In the report of the European Commission on reforms in the Balkan countries and Turkey, the latter is named the key partner of Brussels, cooperation with which helps to solve a number of problems. "However, Turkey continues to move away from the European Union in matters of the rule of law, respect for fundamental rights, separation of branches of government", the document stated. Negotiations on Turkey's accession to the EU are at a standstill, the report's authors noted.

As for the Balkan countries, the commission that studied the processes of their reform recommended the Council of the European Union to begin negotiations on accession to the EU with Northern Macedonia and Albania. Turkey became an associate member of the European Economic Community in 1964. In 1987, the country applied for membership, but only in 2000 it became an official candidate, and in 2005 it began negotiations on joining the EU. However, for 14 years, Ankara and Brussels failed to resolve many issues, including on the status of Cyprus, the northern part of which since 1974 controls the Turkish army.

Erdogan then accused the German authorities of providing asylum to his political opponents, and Merkel replied that he would offer to end negotiations with Turkey. The German Chancellor was supported by the head of Austria Christian Kern, who said that "Turkey has crossed almost all the red lines regarding human rights". He also added that “Europe will never be able to digest Turkey’s accession to the European Union in its life”.

In February of this year, Turkish President Recep Erdogan said that the EU refuses to accept his country only because the Turks practice Islam. He also said that Turkey was tired of the constant requests to accept her into the European Union.