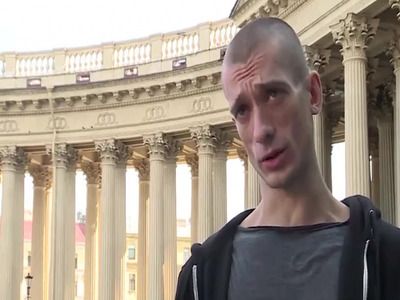 France May Review Pavlensky Refugee Status Depending on Court Decision

WorldJusticeInternational activitiesState services to society
OREANDA-NEWS. French authorities may consider withdrawing political asylum for Russian artist-activist Pyotr Pavlensky following a trial in connection with his participation in the fight for the New Year. This was announced on Wednesday by the Minister of Internal Affairs of the Republic Christoph Castaner on the air of French radio.

The Paris prosecutor’s office began two preliminary investigations on Tuesday against artist-activist Pyotr Pavlensky, who was detained in France on February 16. One of them is connected with the suspicions of Pavlensky’s attack with the use of weapons, the second - with the distribution of an intimate video from the life of the French politician Benjamin Grieve, who claimed the post of mayor of Paris, but after the publication of this video he announced his refusal to continue participating in the election race.

According to lawyers, Pavlensky could face 2 years in prison and a fine of 60 thousand euros. This punishment is provided for in the French Criminal Code article on “the dissemination of information or sexual images relating to a private person without his permission”.
Source: OREANDA-NEWS
Материалы по теме: