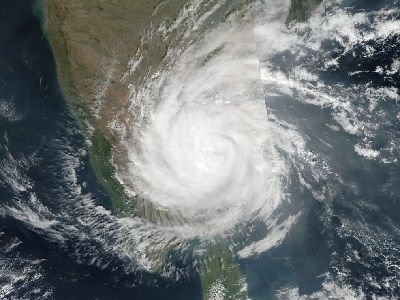 Hurricane “Florence” in the United States: the Number of Victims Has Increased

OREANDA-NEWS The number of deaths of tropical cyclone Florence in the United States increased by at least 10 people, amounting to 31 victims. This was reported by the Associated Press on September, 17. Earlier it was reported about 20 dead.

According to the Agency, the most affected residents of North Carolina, where at least 24 people were killed. At the moment, about 600 thousand local residents were left without electricity, in the neighboring state of South Carolina — more than 60 thousand people. A number of regions of the East coast was flooded.

Florence is already weakened and classified as a post-tropical cyclone. The wind speed does not exceed 11 m/s. However forecasters warn of possible reinforcement elements. Atmospheric phenomenon is close to the border of Ohio and West Virginia and moving in a northeast direction at a speed of about 6.2 m/s is expected in the coming days, "Nightingale" may again gain strength.

The last strengthening of hurricane Florence in the United States was recorded on September 14. American leader Donald Trump held a meeting to combat the effects of the storm and expressed condolences to the families of the victims.

Five people arrested by police in Wilmington County, North Carolina, for robbing a store during a tropical storm "Florence". This was reported on September 15 on Twitter by the Wilmington police Department.

Clarifies that looters have been spotted by local residents who informed the managers of the store about the robbery. Managers, in turn, notified the police about this.

The attackers charged, the details of the incident, the police will report later. In the United States, during natural disasters, cases of robbery and looting are dealt with by the courts under the accelerated procedure.

Hurricane season usually lasts in the Atlantic for six months - from June 1 to November 30. The atmospheric phenomenon is classified as a tropical storm and gets its own name if the wind speed within its limits reaches about 17.5 m / s. at a wind speed of 33 m / s or more, the storm becomes a hurricane.