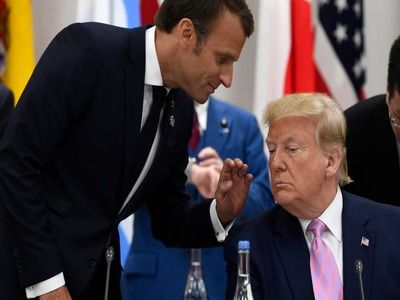 A senior representative of the American administration told the channel that Trump and Macron agreed in a telephone conversation that they want to invite Russia to the summit in 2020. According to the source, the proposal came precisely from the French leader, and the American president supported him. Trump plans to discuss this topic with other leaders this weekend at the G7 Summit in Biarritz, the channel notes.

On the eve, Trump said that he called the G8 format with the participation of Russia more appropriate and called the presence of the Russian side in the G8 appropriate. The US leader indicated that his predecessor, Barack Obama, was to blame for the G8 collapse, who, according to Trump, realized that Russian President Vladimir Putin had "outplayed him".

On August 19, negotiations between Putin and Macron took place at the residence in Fort Berganson. During the meeting, which lasted more than three hours, they discussed the situation in Syria and the Iranian deal, as well as a meeting in the "Norman format" on Ukraine. The Kremlin praised the meeting of leaders. Macron later posted a Russian-language post on Facebook in which he called Russia a “deeply European country” and noted the progress between Moscow and Paris on many issues. Currently, the organization is doing an important job in world politics.

This format of the international summit has been operating for more than 20 years, later it was reduced to G7 against the background of the annexation of Crimea to Russia. Then the leaders decided not to go to the next summit in Sochi and gathered in Brussels without the Russian side. US President Donald Trump, during negotiations with Romanian President Klaus Johannis at the White House, proposed returning Russia to the G8, calling such a format more appropriate. This is reported by the American media.