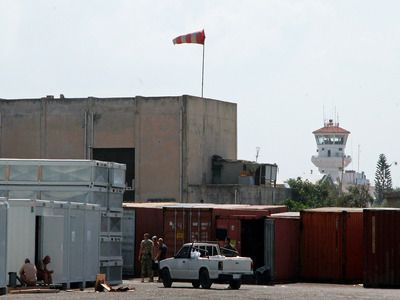 WorldMilitary securityInterstate relationsNew technologies
OREANDA-NEWS. Militants of the "Jabhat al-Nusra" terrorist group banned in Russia attacked the Russian airbase Khmeimim with missiles that were destroyed by air defense forces. This is stated in the message of the Ministry of Defense of Russia, received in the Russian media.

According to the ministry, the attack began the night before from the territory of the Idlib de-escalation zone; in total, six shells were fired at the air base. “The terrorists of Jabhat al-Nusra attempted an attack on the Russian Khmeimim airbase using the multiple launch rocket system (MLRS),” the statement reads. Russian intelligence revealed the installation of the MLRS on the outskirts of the village of Kafer-Noble, it was destroyed by the Air Force. In addition, two terrorists drones approaching Hmeimim were discovered. They were destroyed at a “considerable distance from the air base. The Ministry of Defense clarified that there were no damage at the air base after the attack, it is operating normally.

Earlier this month, the militants fired at Hmeimim several times. On May 2, illegal armed groups attacked her from the settlements of Qalaat al-Mudik and Bab-Atik, all shelling was reflected. On May 6, terrorists twice shot at avaiabazu, their positions were discovered and destroyed. At Hmeymim, 36 missiles were fired at that time, a drone was used to control the fire. On May 1, the Defense Ministry reported that within a month the militants attempted to attack Hamim 12 times, as well as attack the positions of Syrian government forces in Latakia. Terrorists used multiple rocket launchers and drones.

"From the western regions of this zone since the beginning of April this year, 12 attacks were carried out, including using unmanned aerial vehicles - eight," the general said, noting that there were no damage to the base objects as a result of the incidents.