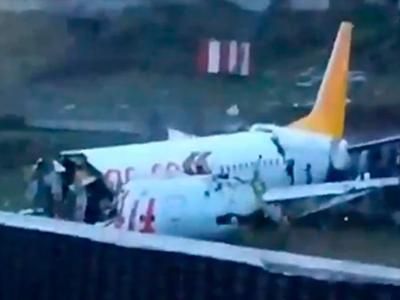 OREANDA-NEWS. At the Sabiha Gokcen Airport (Istanbul), the Pegasus Airlines’ passenger plane Boeing 738, flying from Izmir (Turkey) rolled out of the runway. After landing, the aircraft fell apart and caught fire. As it can be seen from the video posted by EHA News on Twitter, after an emergency landing, the plane fell into three parts.

The Turkish Ministry of Transport and Infrastructure reported that 177 passengers and 6 crew members were on board, none of them died.

Daily Sabah reports that the incident occurred around 18:00 local time. All passengers were evacuated. Firefighters, doctors and police officers are working on the spot. The Turkish Prosecutor’s Office launched an investigation. The flights at the Sabiha Gokcen Airport were temporarily suspended.