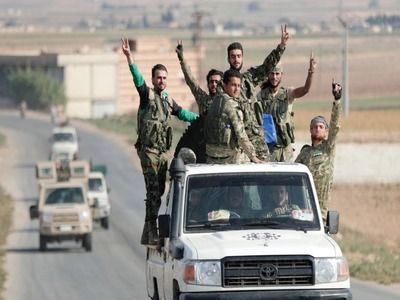 Putin and Erdogan Agree on Situation in Syria

WorldMilitary securityInternational activitiesTerritorial administration
OREANDA-NEWS. At the talks in Sochi on October 22, Russian President Vladimir Putin and Turkish President Recep Tayyip Erdogan agreed on steps to overcome the crisis created in the north-east of Syria by the Turkish military operation "Source of Peace" that began on October 9 and the US decision to withdraw its military from these areas of the country.

According to the terms of the memorandum agreed in Sochi, Turkey’s military operation won't continue, and the main territory occupied during the operation will remain under the control of Ankara. Thus, Turkey wasn't able to realize the previously declared task of Erdogan to create a security zone along the entire border with Syria.

Separately, the status of the city of Kamyshly is agreed. It won't conduct joint Russian-Turkish patrols. Now this large city is under the control of the Syrian army. Vladimir Putin called the agreements decisive. Erdogan also praised them highly.  The head of the communications department of the Turkish presidential administration, Fahrettin Altun, called them "the beginning of a new era in our bilateral relations".