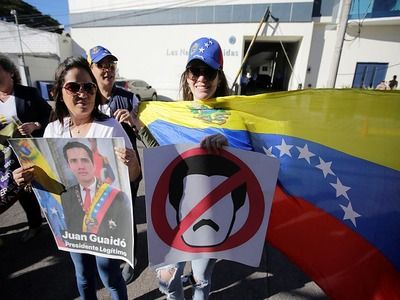 WorldSurvey researchTerritorial administrationInterstate relations
OREANDA-NEWS. The resolution of the conflict between the two warring parties in Venezuela through the mediation of Norway gives a chance for a political settlement in the Bolivarian Republic. Washington should not intervene in the situation, said Alexander Schetinin, director of the Latin American department of the Russian Foreign Ministry, in an interview with the Associated Press, published on Wednesday.

Shchetinin said that these consultations, despite the mutual mistrust of the parties, provide an opportunity for a "political and diplomatic settlement" in Venezuela. The diplomat, whose words are in English, stated that the chances of this are low. Schetinin criticized Washington for "extremely rude interference in the affairs of Venezuela", stressing that "one can't appoint a president from abroad". He noted that any agreement on a settlement in the country should be based on the norms of international law and respect for the sovereignty of Venezuela.

"Any military intervention from abroad, especially through military means, should be excluded", the diplomat said. The diplomat noted that Russian specialists were sent to Venezuela to service the weapons transferred earlier to this country. Schetinin added that we are talking about dozens, not hundreds of specialists, and no new contracts for the supply of weapons to the country have been signed.

The diplomat stated that Russia would accept any agreements on settlement in Venezuela, if they would reflect the will of the people of this country. As stated by the expert, opposition leader Juan Guaydo is too dependent on the recommendations of the American side. “The problem is that in recent months, Guaydo has shown himself to be a politician who lacks independence”, the diplomat said. “Unfortunately, he coordinates all his steps with the US administration”.