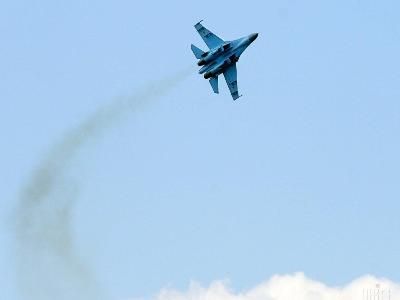 OREANDA-NEWS. On March 25, the Ministry of Defense of Russia reported that the fighter Su-27 belonging to the Aerospace Forces disappeared from the radar screens above the Black Sea, 50 kilometers from the town of Feodosia (Crimea). It is supposed that the aircraft has crashed.

“On March 25, at about 20:10 in the Black Sea, 50 kilometers from Feodosia, during scheduled flights, the mark on the screens of objective controls from the fighter Su-27 disappeared. At 20:11, the signal of an emergency radio beacon in that area was registered,” a representative of the agency said.

An-26 airplane and Mi-8 helicopter were sent to search and rescue a pilot. In addition, the Black Sea Fleet’s anti-submarine ship and civilian vessels are involved in the operation. The Ministry’s official added that search is complicated by difficult weather conditions.