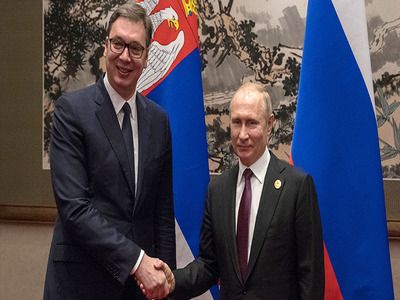 Serbia: We Will Cooperate with the RF and China, Despite Dissatisfaction of the West

WorldInternational activitiesMilitary securityMinistries and departments
OREANDA-NEWS. Serbia has cooperated and will continue to cooperate with Russia and China, despite the West’s discontent. This was announced on Wednesday by the President of Serbia, Aleksandar Vučić, following the results of the Davos forum.

“I’m really fed up with the teachings on how we are in contact with Russia and China. And you don’t have to teach little Serbia how bad relations with China are when I see President Xi Jinping three to four times less than individual leaders of Western European countries. And Serbia’s trade turnover with China is 70-100 times less than those countries that teach us, they use every opportunity to sell their goods to China, get everything from China, make money on China. But they say: “You Serbs, do not dare to cooperate with the Chinese, this isn't for you", said President.

"The situation is the same with Russia: as soon as they need Russian President Vladimir Putin for something, then everything is fine. But it’s not for you, Serbs, you are small, who are you to cooperate with Russia by us? We are a sovereign country , an independent country, and we will cooperate with Russia and China. Yes, we are on the European path, this is our strategic course, but there is no doubt that we will continue cooperation and will develop cooperation with both Russia and China, because we have own policy, own country, own people, and my job is to fight for our people and our country", said Vucic.

Vucic said earlier that he had received written confirmation of Xi Jinping’s upcoming visit to Belgrade at the end of 2020. Prior to this, the Serbian leader repeatedly invited the President of the PRC to come to Serbia.
Source: OREANDA-NEWS
Материалы по теме: