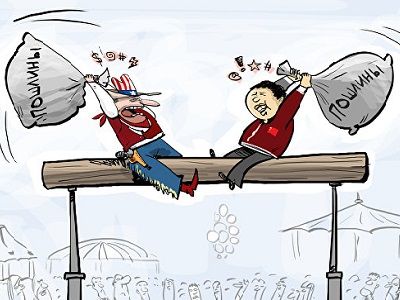 OREANDA-NEWS The US President - Donald Trump - has threatened China's new import duties.According to this information, additional measures can be applied as soon as possible.

"I will be tough with China because I have to be ... we imposed duties on 50 billion in technology. Now we've added another 200 billion. And it is unpleasant to say, but if I want, we are ready for another 267 billion dollars," the head of state said.

The US then imposed a 25 percent duty on Chinese imports of $ 16 billion. A minute later, the Chinese side introduced similar measures.

The Chinese foreign Ministry said that the policy of pressure on the trade issue is useless and will not help resolve the conflict. The Ministry stressed that China adheres to a consistent position on this issue.

Analysts note that Beijing has a powerful weapon-a package of US government bonds worth 1.2 trillion dollars. If China starts to sell them, the White House will not be able to borrow money to stabilize the budget, experts say.

Press Secretary of the White house Lindsay Walters noted, that the final decision on the introduction of the new tariff has not yet been taken. Previously, economic advisor Larrick Kudlow said that the trade dispute with China will continue until Beijing will not compromise.

The last few years, American bonds gave Beijing billions of dollars in profitability. In late 2016 and early 2017, China reduced its investment in the US national debt to compensate for the strengthening of the yuan.

The volume of trade between China and the United States for the first eight months of this year increased by 12.8% year-on-year and reached $414.25 billion.

As follows from the documents, Chinese exports to the United States during this period increased by 13.4% to $303.44 billion. Imports of American products increased by 11.1% to $110.81 billion. Thus the trade surplus amounted to $192.64 billion, an increase of 19.18% compared to the same indicator for the first seven months of the year.