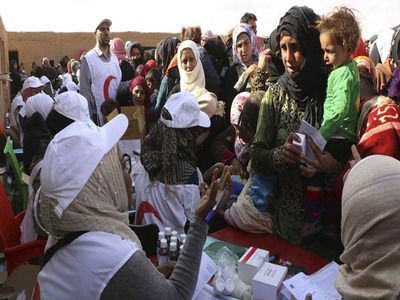 WorldMilitary securityState services to societyTerritorial administration
OREANDA-NEWS. UN High Commissioner for Refugees Filippo Grandi called on Turkey and other countries neighboring Syria to expand the reception of refugees in connection with the escalation of hostilities in the province of Idlib. He said this on Thursday in Geneva, recalling that as a result of the fighting, more than 900 thousand Syrians have left their homes in recent months.

"As happened in the past in times of crisis, I urge neighboring states, including Turkey, to expand their reception so that those who are in particular danger can reach safe places", Grandi said, stressing that he is aware of the "tensions" "related to" public support "for the reception of refugees and the limited possibilities for their accommodation. The High Commissioner recalled the need to continue and increase the support provided by the international community to Syrian refugees and their host countries.

Earlier, the situation in Idlib sharply worsened after the Russian and Turkish military made another attempt to introduce a regime of silence, but the terrorists only intensified their attacks. As a result, military experts from the Russian Federation and Turkey died. The Syrian army retaliated against extremists, taking the city of Sarakib on February 5.
Source: OREANDA-NEWS
Материалы по теме: