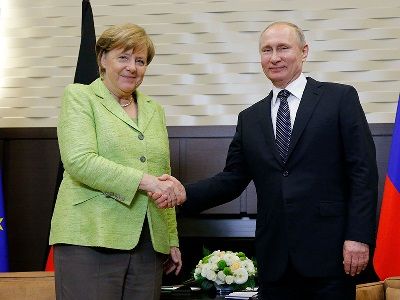 OREANDA-NEWS In Berlin, ended the conversation between Russian President Vladimir Putin and Chancellor Angela Merkel. It lasted about three hours.

Before the conversation, the President and the Chancellor issued a joint statement to the press. Putin, in particular, noted the importance of the "North stream — 2" for Europe. He also said that the project does not close the transit of gas through Ukraine.

Putin and Merkel discussed the Iranian deal and called for the preservation of the agreement. In addition, the Russian President complained about the lack of progress in the settlement of the Ukrainian crisis. The Chancellor, in turn, promised to discuss with Putin sending a peacekeeping mission to Ukraine.

The parties also discussed topical issues, adding that all controversial issues can be resolved through dialogue.

The President of Russia said that he intends to continue the practice of communicating with German business, confirmed the interest of the Russian Federation in large projects. This information reported Dmitry Peskov - the press-Secretary of Russian leader - to journalists.

"One of the priority areas (cooperation — ed.) is energy, it is well known. Germany is the largest buyer of Russian energy resources. In 2017, we supplied only 53.8 billion cubic meters of gas," Putin said.

He added that these volumes cover more than 30% of the German market. "The consumption of Russian gas is constantly growing and this year has increased by 13%," the President of Russia said.

On the way to Germany, the Russian leader visited the wedding, the foreign Minister of Austria Karin Kneissl. Putin gave the diplomat the painting with rural motifs and ancient oil wringer with the Tula samovar.

In addition, Putin made a toast in German, which caused applause from the guests of the wedding ceremony. The wedding was also attended by the Kuban Cossack choir.

As the press Secretary of the Russian President Dmitry Peskov noted, the visit to Austria was of a private nature.