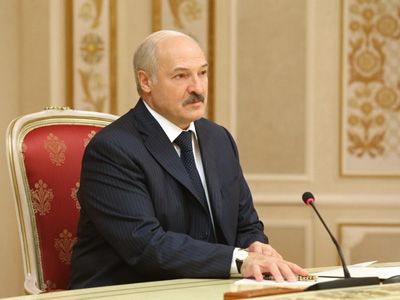 OREANDA-NEWS. On 20 January Belarus President Alexander Lukashenko approved the resolution of the protection of the Belarusian state border in 2017.

The President remarked that the protection of the border was discussed twice at his level in 2016. “The practical operation of border protection agencies was checked. Perhaps, there was a mixed reaction. The President will pay close attention to the performance of all military agencies, first of all, border protection units. You should get used to it. Such attention is drawn to these issues for a reason,” Alexander Lukashenko said.

In his words, a complicated international situation, the escalation of the terrorist threat in the world, illegal migration, the distribution of drugs and weapons make us do our best to enhance the protection of Belarusian borders. “Now we can’t relax and hope that there will be fewer threats to our border security in the near future,” the President said.

New control and surveillance complexes are installed at the border; Belarus cooperates with the European Union in this area. “Of course, this cooperation can be more comprehensive. We are responsible for the protection of the European Union from illegal migration, drug trade, human trafficking. It is worth a pretty penny for us,” Alexander Lukashenko said.

The President remarked that ordinary citizens living in the near-border territories also traditionally make a big contribution to the protection of the border.

The head of state also spoke about the optimization efforts in border protection agencies. He said that their personnel numbers are rather small today. “However, we must think about the redistribution of the personnel. Fewer people are needed in institutes, central and other administrative bodies, more people should serve at the border,” he said.

Alexander Lukashenko wanted to be informed about the situation at the state border and about the pending issues in this field. He asked about the efforts to facilitate border crossing at border checkpoints, the measures to maintain order in the border zone and near-border territories. The President also focused on the professional advancement of the military and on the creation of optimal living and service conditions for the personnel.

The President also spoke about the introduction of the five-day visa-free travel rules for citizens of 80 countries who enter Belarus via the MinskNationalAirport. “The document was in development for a year and a half. It was thoroughly reviewed by all the government agencies, first of all, in terms of the potential risks it may pose for Belarus, our partners and neighbors,” the head of state said.

Alexander Lukashenko drew attention to the relevant information campaign that had unfolded in mass media. “Sometimes I get surprised as I read comments by these authors. These people either do not understand the essence of the document or stir up tension on purpose. Most probably, they do this deliberately. The abolition of visas does not mean cancellation of border control. It will remain in place. The traveler’s identity will always be checked,” the Belarusian leader said. “We have not violated anything from the standpoint of our domestic legislation. We act within our sovereign rights. We have not broken any agreements with other countries.”