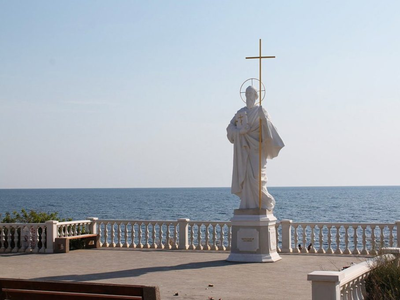 StateCulture and leisureКультурное наследие
OREANDA-NEWS The sculpture of this particular apostle should welcome all guests coming to the peninsula on the Crimean bridge, the participants of today's telebridge between Moscow, Simferopol and Belogorsk decided.

The director, chairman of the creative council of the Russian Military Historical Society, Andrei Konchalovsky, said that the military historical society is ready to establish in the Crimea a monument to Andrew the First-Called, which will symbolize the reunification of Crimea with Russia.

The Apostle Andrew spent a lot of time in Tavrida; he was from Kerch that he traveled north with his Orthodox mission.

According to the Minister of Culture of Crimea, Arina Novoselskaya, the site for the monument has already been defined, its area is about 1.3 hectares. In the Crimea and in Sevastopol there are already several monuments to the Apostle Andrew, but there is no monumental object. The appearance of the monument will be determined at a creative competition.