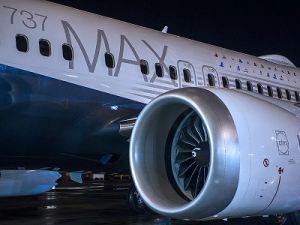 "Rosaviation sent a notice to NOTAM that flights of this modification are prohibited in the airspace of the Russian Federation until further notice. Neither yesterday nor the day before yesterday, this type of aircraft did not fly on the territory of Russia. We are monitoring this situation. So that citizens can be calm," he told reporters.

The Head of the Department added that the decision to lift the ban will be made after analyzing the directives and messages that will come from the US authorities and Boeing.

On Tuesday, the operation of the Boeing 737 Max was suspended by S7 airline, in the air fleet of which there were two Airliners of this model.

The Boeing 737 Max 8 Ethiopian Airlines aircraft, carrying 157 people, crashed near the Ethiopian city of Debre Zeit on the morning of 10 March. Among the dead — representatives of 35 countries, including three Russians. As the General Director of the carrier, before the tragedy, the pilots complained of problems "with flight control."

This is the second accident with the aircraft Max 8 for five months: in October 2018, Boeing-737 MAX 8 Indonesian company Lion Air fell into the Javanese sea soon after departure. Then all 189 people on Board were killed.

After the tragedy, some countries, such as the US, Canada, China, Austria, France, Italy and Switzerland, Georgia, Mexico, India, Japan, and Russia, banned Boeing flights of this model.