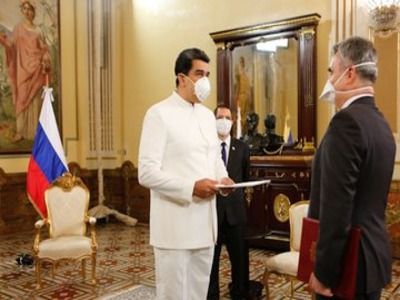 StateInternational activitiesMinistries and departmentsDiplomatic organizations
OREANDA-NEWS. On Monday, Russian Ambassador to Venezuela Sergey Melik-Baghdasarov presented his credentials to the President of the South American country, Nicolas Maduro. An excerpt from the ceremony was broadcast in the Periscope of the Venezuelan leader.

The ceremony participants did not shake hands, but posed for a photograph, touching their elbows. "The ambassador sent me a direct message from President Vladimir Putin about full solidarity with Venezuela, the Bolivarian government and full support", Maduro said at a press conference broadcast on Venezolana de Television. President Vladimir Putin appointed Sergei Melik-Bagdasarov as Russian Ambassador to Venezuela on February 17.

According to the latest official data, the number of cases of infection with a new coronavirus in Venezuela reached 135, three people died. Since March 17, the country has been under general quarantine.