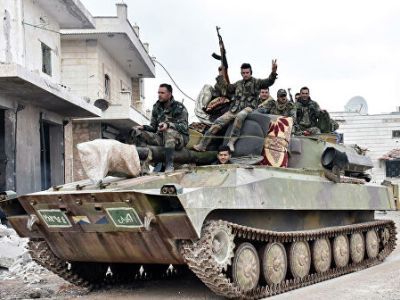 OREANDA-NEWS. Syrian government troops launched a counteroffensive in response to the aggression of militants. This was reported by Major General Yury Borenkov, the head of the Russian Center for the Reconciliation of the Opposing Sides.

He noted that the attacks were carried out solely on the positions, equipment and groups of militants concentrated in the western suburbs of Aleppo, as well as in the cities of Maarat Al-Numan and Saraqib in Idlib Governorate. “The civilian population and infrastructure were not damaged,” Borenkov emphasized, noting that Western non-governmental organizations also recognized this fact.

The officer also informed that since the 9th of January, 211 Syrian servicemen were killed and more than 300 were wounded as a result of shelling and clashes with militants. During the same period, 121 civilians were killed due to terrorist attacks, 254 people were injured.
Source: OREANDA-NEWS
Материалы по теме: