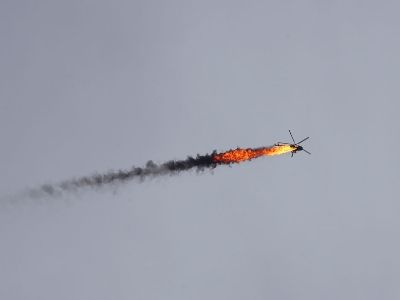 Syrian Helicopter Was Shot Down in Idlib Zone

OREANDA-NEWS. Turkish news agency Anadolu reports that a helicopter of the Syrian Air Force was shot down in the western part of Aleppo Governorate, in the Idlib de-escalation zone.

TRT channel published a video, judging by which an aircraft was hit with a ground-to-air missile. It is reported that the attack was carried out by the fighters of Syrian opposition.

This is the second helicopter of the Syrian Armed Forces downed in Idlib in recent days. On February 11, militants brought down a helicopter near the city of Saraqib. The Syrian military confirmed the death of the aircraft crew.

Earlier, the Syrian government army established control over the road Damascus–Aleppo, except a small area near the city of Maarat al-Numan, blocked by the Turkish troops.