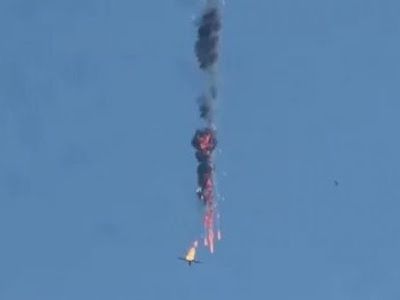 Turkey Reports of Syrian Military Aircraft Shot Down in Idlib

The agency noted that this happened as part of the operation Spring Shield, which began on March 1. Syria’s state television confirmed the strike on the aircraft. A military source in the Arab Republic said that the airplane crashed near the city of ​​Maarat al-Numan, it was brought down by an air-to-air missile of the Turkish Air Force. There is still no information about the fate of pilots.

Later, Syrian state television reported that the army shot down a Turkish drone near the city of Saraqib in the governorate of Idlib.

This is not the first case of attacks on Syrian planes from Turkish military. On March 1, two aircrafts crashed, the pilots managed to bale out.

Before that, the Syrian command announced the closure of airspace over Idlib. The statement clarified that any aircraft noticed in this region will be perceived as hostile and shot down. Later, a Turkish drone was brought down over Saraqib.