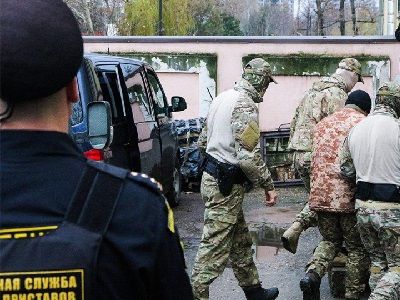 Ukrainian Sailors, Who Are Detained in Crimea, Transferred to Moscow

OREANDA-NEWS The command of the crews of three ships of the Ukrainian Navy detained for illegal crossing of the border of the Russian Federation, will be transferred to one of the detention centers of Moscow, said the Crimean Ombudsman Lyudmila Lubina.

Earlier, the court of Simferopol arrested for two months 24 detained Ukrainian soldiers, including officers and two employees of the SBU. Then all of them were placed in a pre-trial detention center of Simferopol.

"The command staff will be transferred to the investigation in the detention center of Moscow", - told Lubina.

24 Ukrainian citizens-sailors, Navy and SBU officers-were arrested before January 25. They are in the status of suspects under part 3 of article 322 of the criminal code "Illegal crossing of the state border of the Russian Federation", which involves up to six years in prison.

On Sunday, three ships of the Ukrainian Navy-Berdyansk, Nikopol and Yana Kapu — violated the state border of Russia, entered the temporarily closed water area of the territorial sea of the Russian Federation and moved from the Black sea to the Kerch Strait. They maneuvered dangerously, did not obey the legitimate demands of the Russian authorities. Ukrainian ships with 24 sailors were detained, three Ukrainian soldiers were wounded, they are hospitalized and receive medical care, the lives of sailors are not in danger. After the incident, they were prosecuted for illegal crossing of the state border.