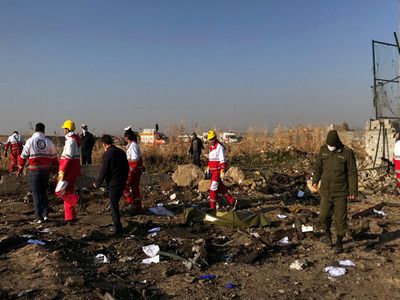 WorldAir transportIncidentsInternational activities
OREANDA-NEWS. A delegation of ten Canadian experts, in consultation with the Iranian Foreign Ministry, is sent to Tehran to take part in investigating the causes of the crash of the Ukrainian Boeing 737. This is stated in a statement by Iran’s Foreign Ministry spokesman Abbas Mousavi.

In turn, French Foreign Minister Jean-Yves Le Drian said his country was ready to help in the investigation. In an interview with the French media, the minister pointed out the need to bring “full clarity” to the question of what caused the disaster. Airliner owned by Ukraine International Airlines crashed on January 8 shortly after takeoff from Tehran Airport. 176 people on board, including 63 Canadian citizens, were Died.

On January 9, Canadian Prime Minister Justin Trudeau said he had information that the plane was shot down by an Iranian anti-aircraft missile. Iranian authorities have denied that the cause of the liner’s death was a missile. On January 10, Mousavi invited Trudeau to transfer all of Canada’s information to the commission investigating the incident.
Source: OREANDA-NEWS
Материалы по теме: