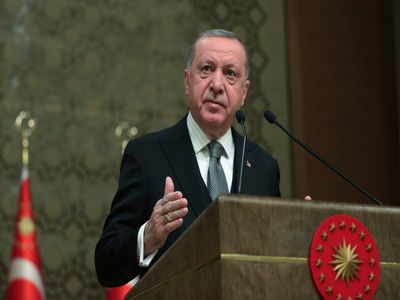 Erdogan Announced the Sending of Turkish Soldiers to Libya

WorldMilitary securityInterstate relationsTerritorial administration
OREANDA-NEWS. Turkish President Recep Erdogan has announced that troops from his country are already leaving for Libya as part of an agreement with the Government of National Accord (PNC), which controls Tripoli. Regarding the agreement with Tripoli on the development of the shelf in the eastern Mediterranean, Erdogan noted that there is nothing new in it. According to him, negotiations on this topic were conducted at a time when Libya was led by Muammar Gaddafi.

In November last year, Turkey concluded a cooperation agreement with the government in Tripoli, which also includes the provision of military assistance against the forces advancing in the capital, General Khalifa Haftar. The latter is the commander of the Libyan National Army and represents the alternative government of the country and the Libyan parliament, which are located in Benghazi.

Earlier on January 4, Haftar announced a general mobilization to counter external aggression by Turkey. The military leader also accused President Recep Tayyip Erdogan of intending to revive the "Ottoman heritage" in Libya. In the times of the Ottoman Empire, which controlled Libya from the beginning of the 16th century until 1911.
Source: OREANDA-NEWS
Материалы по теме: