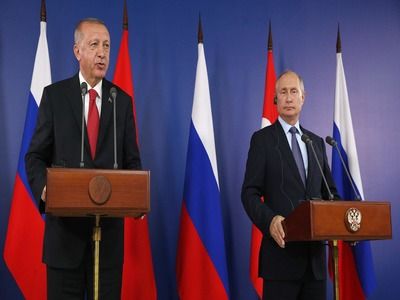 Expert: Erdogan and Putin's Negotiations on Idlib Are Crucial for a Settlement in Syria

WorldEventsInterstate relationsMilitary security
OREANDA-NEWS. The talks between the presidents of Turkey and Russia, Tayyip Erdogan and Vladimir Putin, on the situation in Idlib, scheduled for Thursday, are extremely important for a political settlement in Syria. This opinion was expressed on Wednesday in a conversation with Russian media by Turkish analyst Imbat Muglu. A Turkish analyst believes that "if the demands of the leaders are too different, then at the negotiating table in Moscow it will be difficult to achieve results".

Muglu expressed hope that at a meeting in Moscow, leaders would still be able to make progress on Idlib. “Negotiations in the Russian capital may be Ankara’s last diplomatic initiative to solve the Syrian problem”, the analyst said. “This is due to the fact that Turkey will not accept the road map that the Russian side offered to Turkish colleagues during negotiations at the level of mixed delegations in Moscow and Ankara. I hope that Russia will present to Turkey a new road map that would satisfy Ankara".

As the Kremlin’s press service previously reported, President Putin will hold talks with President Erdogan on March 5, who will pay a working visit to Russia. It's expected that the parties will discuss the problems of the Syrian settlement, taking into account the current aggravation of the situation in the Idlib de-escalation zone.
Source: OREANDA-NEWS
Материалы по теме: