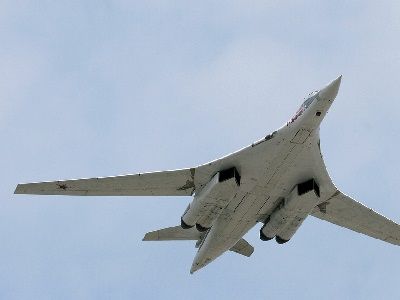 OREANDA-NEWS  Russian strategic bombers TU-160 about ten hours flying over the Caribbean sea, at some stages they were accompanied by Venezuelan fighters. This was reported on Wednesday by the press service of the defense Ministry.

"During the international visit of the delegation of the aerospace forces to the Bolivarian Republic of Venezuela, the pilots of TU-160 strategic missile carriers flew in the airspace over the Caribbean sea. The flight duration was about ten hours," the report said.

"At some stages of the route, the flight of Russian missile carriers was carried out in conjunction with the SU-30 and F-16 fighters of the national Bolivarian military aviation. The pilots of the two countries worked out the interaction in the air during the flight missions, " the Ministry added.

"The pilots of the two countries worked out the interaction in the air during the flight missions," the report said. "This distance is not a problem for these aircraft. And this is a very good training for crews",-said the former Deputy Head of the Russian air force.

As stressed in the military Department, the flight was carried out in strict accordance with international rules of airspace use.

On the arrival in Venezuela of two TU-160, heavy military transport aircraft AN-124 "Ruslan" and long-haul IL-62 VKS of Russia, the press service of the Ministry of defense said on Monday. The US administration expects that these aircraft will leave Venezuela on Friday, but the Russian side did not specify the duration of their stay in the Latin American country.

This is not the first such flight of the Russian TU-160. Previously, these strategic missile carriers visited Venezuela in September 2008 and in October-November 2013.