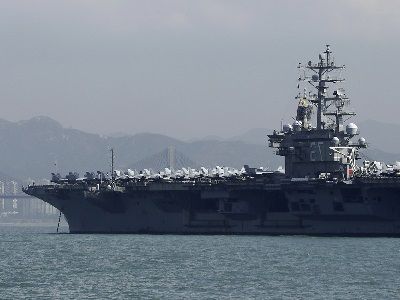 US Preparing to Send Their Ships to the Black Sea

OREANDA-NEWS The United States has begun to prepare the steps necessary to send naval ships to the Black sea in the light of the incident in the Kerch Strait. This was reported on Wednesday by CNN, citing three United States officials.

According to this information, the command of the US Armed forces sent a request to the state Department to notify Turkey about plans to send us ships to the Black sea. Sources of the TV company called such plans "a response to Russia's actions against Ukraine in the Kerch Strait, connecting the Black and Azov seas." The notification, however, is intended to provide the US Navy with the option of sending ships to this area, but it is not necessary that this option will be chosen, one source explained.

As explained by the TV company, the Montreux Convention of 1936 obliges the United States at least 15 days to notify Turkey about the possibility of passage of American ships through the Straits of the Bosphorus and the Dardanelles connecting the Mediterranean sea with the Black sea. According to the provisions of the Montreux Convention, warships of non-black sea States in peacetime can be in the Black sea for no more than 21 days.

"The United States acts in accordance with the Montreux Convention. However, we will not comment on the essence of our diplomatic correspondence with the Turkish government," the TV company quotes the response to the request received from the US foreign Ministry.

The official representative of the Europe-based Sixth fleet of the United States Kyle Raines said about the readiness of the fleet to perform the assigned task. "We regularly conduct operations in support of security and stability in the area of responsibility of the Sixth fleet, including international waters and airspace over the Black sea. We reserve the right to act freely, in accordance with international law and norms," Raines added.