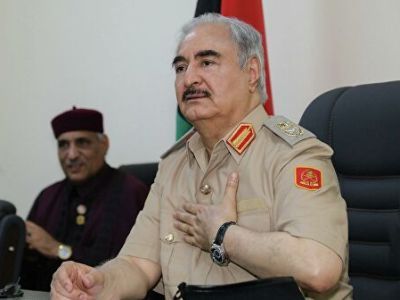 Haftar Wrote a Letter to Putin

OREANDA-NEWS. Commander of the Libyan National Army, Field Marshal Khalifa Haftar wrote a letter to Russian President Vladimir Putin, thanking him for his efforts to establish peace and stability in Lybia.

“I thank you and express full support for the Russian initiative to hold peace talks in Moscow, which should lead to peace in Libya. I confirm that we are ready to accept your invitation to visit the Russian Federation to continue the dialogue,” the message published by the Kremlin’s press service says.

Russian side also reported that the situation in Libya became the main topic of a telephone conversation between German Chancellor Angela Merkel and Vladimir Putin. The two politicians discussed preparations for the international conference on the settlement of the libyan crisis which will be held on January 19 in Berlin.
Source: OREANDA-NEWS
Материалы по теме: