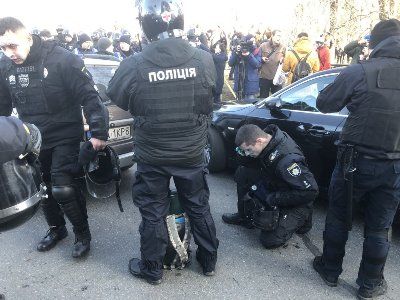 Kiev Police Reports about Officers Injured in Clashes with Protesters

OREANDA-NEWS. Local media report that during the protests in Kiev, clashes between its participants and police officers occurred.

According to RBC Ukraine news agency, one of the skirmishes arose after policemen tried to prevent activists from setting up a tent on the roadway of Mikhail Grushevsky Street near the Verkhovna Rada building.

The UNIAN agency reports that clashes with the police took place near the Arsenalnaya metro station, where the police did not let tractors pass to the building of national parliament.

TV channel 112 Ukraine reports that a policeman was injured after someone sprayed pepper gas from a can. According to Interfax Ukraine agency, in a fight between law enforcement officers and nationalists, pepper gas, wooden sticks, pyrotechnics and brilliant green were used.

The Kiev National Police Department reported that protesters began a fight with policemen after the latter tried to conduct a preventive conversation with demonstrators. “According to preliminary data, two policemen were injured in the conflict. They were taken to a hospital for delivery of health care. One active participant in the incident was delivered to the territorial police department on suspicion of committing unlawful acts,” the police department says.

According to Interfax Ukraine, on December 17 in the center of Kiev, four protests are taking place simultaneously, in which opponents of the law on the sale of land, considered by the deputies of the Verkhovna Rada, are taking part. Protesters demand to prohibit the sale of land to foreigners.
Source: OREANDA-NEWS
Материалы по теме:

Human Rights Activists Reported about 1,100 People Detained at Rallies in Belarus on Sunday

Protesters Burst into the Building of the Armenian Parliament