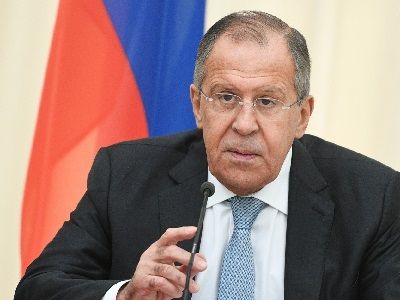 Lavrov: Russia Will Not Fight With Ukraine

"Sometimes the recognition of the independence of the DPR and the LPR and the Declaration of war, as you suggest now - I can not imagine how Russia will go to war in Ukraine - sometimes it is a manifestation of nervous breakdown and weakness," he added.

On November 25, in the Kerch Strait, Russian border guards with the use of weapons detained three Ukrainian Navy ships heading to the Sea of Azov. 24 Ukrainian sailors are under arrest in Russia.

The parties accused each other of provocation. Ukraine has introduced martial law in a number of areas and consider the sailors arrested in Russia prisoners.

The incident in the Kerch Strait gave rise to fears about the possibility of a full-scale war between Ukraine and Russia. Thus, the Minister of foreign Affairs of Belarus Vladimir Makei said on December, 6 at a meeting of the OSCE Council of Foreign Ministers in Milan: "With the incident in the Kerch Strait, we have approached an extremely dangerous line - a full-scale conflict. This is the red line. Behind it is the point of no return. We know too well from history that such incidents have led to World Wars in the past."

Chairman of the Federal political Committee of the party "Yabloko" Grigory Yavlinsky also believes that the incident in the Kerch Strait brought Russia "close to an open war, in particular, with Ukraine." According to him, there is "a real danger of war, not small, not hybrid, but big and real". "At the end of December, it can really happen," - said Yavlinsky December, 15. Russia's participation in Syria also brings Russia closer to the danger of war, the politician believes. In addition, there was the question of the collapse of the intermediate-range and short-range missile Treaty, which could lead to the emergence of missiles in the Baltic States, Georgia or Ukraine and destroy Russia's military doctrine. Yavlinsky noted that the military rhetoric is becoming more lightweight, the country is seriously talking about the possibility of local nuclear conflicts. "All this is reminiscent of the situation before the First World War," - said the leader of "Yabloko".