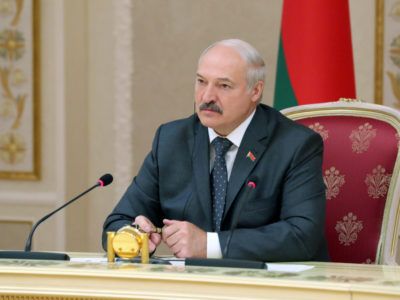 Lukashenko Said Why the Border with Ukraine will be Closed

OREANDA-NEWS. President of Belarus Alexander Lukashenko said that Belarus was forced to close the border with Ukraine due to the gushing flow of arms. He said this on Tuesday in Minsk, speaking at the international high-level conference on the fight against terrorism with innovative approaches.

Lukashenka stressed that he did not want to intervene in the conflict in Ukraine, because "he knows what is happening there and what is the cause of conflict." However, the President sent his foreign Minister to the representatives of international organizations, to propose a plan of specific actions to resolve the hostilities. "If you reject this plan, where the load was to go to Belarus, I will consider that Europe does not want the conflict settled down, stopped," — concluded Lukashenko.

Over the past year, as reported in the state border Committee of Belarus, on the border with Ukraine seized more than 800 76 ammunition and weapons. Then Lukashenko instructed to strengthen the protection of the southern borders of the country and did not rule out increasing the number of guards, because he knows, "as there is now trouble for Belarus, including weapons smuggled".