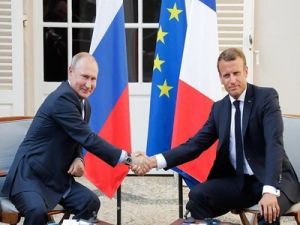 OREANDA-NEWS. French President Emmanuel Macron, speaking about the results of the meeting with Russian President Vladimir Putin in Bregancon, expressed confidence in the European future of Russia. He posted a statement on Twitter on Tuesday.

"I am convinced that the future of Russia is completely connected with Europe. We believe in Europe, which extends from Lisbon to Vladivostok", he wrote.
The French leader also said that among those touched upon during the conversation with Putin, the situation around natural fires in Siberia and the thawing of permafrost in this region were featured. "Russia is directly faced with the devastating effects of climate change. I am pleased with its decision to begin ratification of the Paris climate agreement. This is a strong symbolic gesture, we must follow this path", said Macron.

Also, he said, both leaders "expressed their commitment" to creating long-term stability in Libya and to restore order in the country. Regarding the Syrian issue, in this case, Macron emphasized the need for an immediate ceasefire in Idlib province in accordance with the agreements reached at the meeting in Sochi on September 17 last year. In total, negotiations between the presidents of Russia and France lasted more than 2.5 hours. Officially, no press statements following the meeting were planned.

Before the start of negotiations at Fort Bregancon, the summer residence of the French presidents, Macron warmly welcomed his Russian counterpart, saying that he was "extremely pleased to have the opportunity to talk" with him. “Thank you for this visit to Breganson, dear Vladimir, for taking the time for this trip”, he said.

At the beginning of the meeting with French Leader Emmanuel Macron, Russian Leader Vladimir Putin thanked his colleague for the hospitality and comfortable conditions for negotiations in a very beautiful corner of France. This is a very pleasant start to the negotiations.