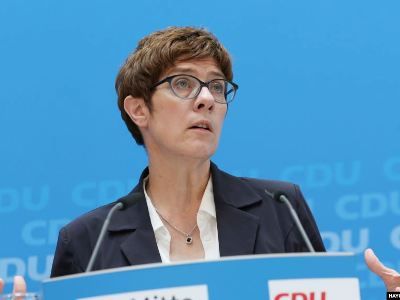 Merkel’s Successor Made a Statement on Crimea and Russia

OREANDA-NEWS. Annegret Kramp-Karrenbauer, the head of the Christian Democratic Union of Germany and the successor of the Federal Chancellor Angela Merkel, said that Berlin wants to be in good neighborly relations with Russia, but there are signs of violation of international law in the situation with the Crimea which had joined the Russian Federation in 2014.

“Germany simply cannot be silent. Violation is the violation, and we should call it so,” the politician said during a speech at the Young Union of German congress on October 13. In her opinion, “one must not be silent when injustice occurs.”

Sergei Tsekov, the member of Russian Council of the Federation from the Republic of Crimea, commented to journalists on the words of Kramp-Karrenbauer. “Will she have a future if she demands the return of the Crimea to Ukraine, if she continues the policy of sanctions?” he said. “If she was objective, she would do everything so that as many politicians from Germany as possible would come to the Crimea to communicate with Crimean residents who would see what changes are happening in the Crimea.” He added that German politician is under the “strong pressure from her own and European propaganda.”

Yury Gempel, the head of the Interethnic Relations and Public Diplomacy Committee of the Crimean parliament invited Kramp-Karrenbauer to visit the Crimea. The deputy stated that such a visit would allow her to verify the fallacy of conclusions about the violation of international law during annexation of the peninsula to Russia.