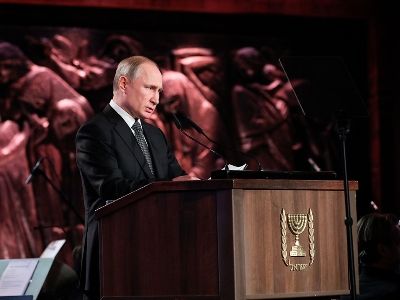 Putin Proposed Convening a Summit of the UN Founding States

OREANDA-NEWS. The President of the Russia Vladimir Putin, speaking at the Holocaust Forum in Jerusalem, offered to convene a summit with participation of ​​Russia, China, France, Great Britain and the United States – the countries that founded the United Nations Organization.

“We are fully responsible for ensuring that the terrible tragedies of the past war never happen again,” the politician said. According to him, the world community must be vigilant and not overlook the first manifestations of hatred and xenophobia. “Oblivion of the past, disunity in the face of threats can result in dire consequences,” Putin noted.

The President addressed the five powers which were the founders of the UN. “We discussed it with some of our colleagues, and in general, saw a positive reaction for holding a meeting of the heads of state… anywhere in the world,” he announced.

The situation in Libya can be among the topics of such a summit, although other problems also can be raised, Putin said.