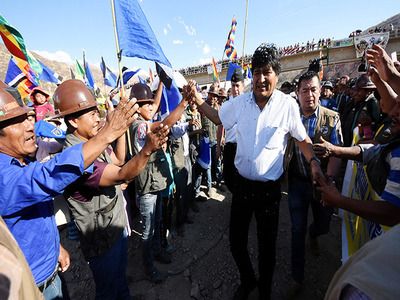 Russian Foreign Ministry: Events in Bolivia Developed According to Patterns of a Staged Coup D'etat

PoliticsState managementSocial associationsMinistries and departments
OREANDA-NEWS. Russia is deeply concerned that events in Bolivia developed “according to the patterns of a coup d'état”, despite the fact that the country's authorities tried to find constructive solutions through dialogue. This is stated in a commentary circulated on Monday by the Russian Foreign Ministry’s Information and Press Department regarding the situation around Bolivia.

"It causes deep concern that during the domestic political crisis in the country, the willingness of the government to search for constructive solutions through dialogue was swept away by the development of events on the patterns of a staged coup d'etat", the Russian Foreign Ministry said.

The diplomatic department emphasized that Russia relies on the responsibility of the political forces of Bolivia and encourages them to find a constitutional solution to the domestic political crisis. Moscow is worried about the dramatic development of events in Bolivia, "where the wave of violence unleashed by the opposition didn't allow the completion of the presidential mandate of Evo Morales".