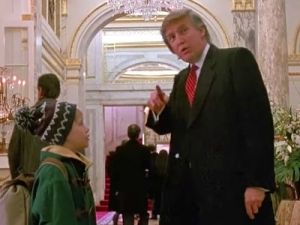 OREANDA-NEWS. US President Donald Trump called it an honor to participate in the film Home Alone 2. The answer of the American leader to the question about his favorite movie of the Christmas holidays was broadcasted by C-Span channel.

“I was a little bit younger, to put it mildly… It turned out to be a very big hit, obviously. It’s a big Christmas hit, one of the biggest”, the President said. “It’s an honor to be involved in something like that”, the politician added. Trump also noted that many children often notice him not on TV, but in the film, especially on Christmas days.

In the comedy film Home Alone 2 released in 1992, Trump played a cameo role: he helped the main character, the boy Kevin, to find the way in the hotel lobby.