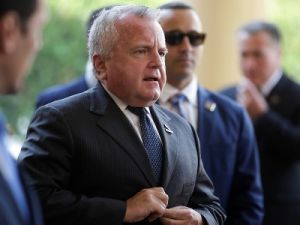 Till now Sullivan held the post of Deputy Secretary of State. In March 2019, he temporarily served as the head of the Department of State after the resignation of Rex Tillerson.

Earlier, the Wall Street Journal reported on Trump’s intention to send Sullivan to Moscow. According to the publication, Russian authorities agreed to his appointment to this post. The fact that Sullivan will replace John Huntsman who left Russia was also previously written by The New York Times, citing sources in the US presidential administration.

In late August, Trump commented on Sullivan’s candidacy. He described him as a person who is respected in Russia. According to the president, Secretary of State Mike Pompeo also values ​​him.

Earlier, among the candidates for the post of ambassador in Moscow, there was also a Special Representative for North Korea, who in the early 1990s headed the Moscow branch of the International Republican Institute (later it was recognized as an undesirable organization in Russia). However, he decided to focus on the nuclear-free status of the Korean peninsula.

John Sullivan became US Deputy Secretary of State in May 2017. In the 1990s, he served as Deputy Chief Counsel for the election campaign of President George Bush Sr. Then he worked at the law firm Mayer, Brown, Rowe & Maw in Washington.

The Washington Examiner called Sullivan the ideal candidate to work in Moscow. He has a good relationship with both Republicans and Democrats, the publication said, and the diplomat was called a real patriot ready to defend his position. The magazine also indicated that ambassadors who have good contacts in Washington are usually valued in Russia.

Huntsman served as USA ambassador to Moscow since 2017, and left Russia in early October. The politician intends to run for governor in the state of Utah.