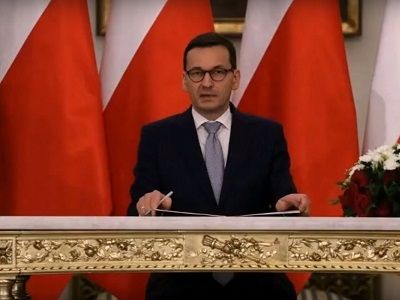 OREANDA-NEWS  Russian Senator Alexey Pushkov commented on the words of the Prime Minister of Poland Mateusz Moravcova, who said that Russia could launch an offensive in Ukraine after the launch of the gas pipeline "Nord stream-2". "Warsaw's fantasies know no boundaries. But realism there can not be found," wrote a member of the Federation Council on Twitter.

Earlier, US Secretary of state Mike Pompeo told the media that Washington, together with Kiev, intends to work to stop the implementation of the “Nord stream-2” project. "The US has a large set of tools, but we do not intend to call them," - said the US permanent representative to the EU, Gordon Sandlin.

The Russian Foreign Ministry noted that such rhetoric is "a classic example of unceremonious interference in the Affairs of specific EU States." The State Duma reminded that the benefits of the Russian project are more important for Europe than "political pressure from overseas friends".

We remind that by now more than 200 kilometers of the gas pipeline have been built. "Everything is on schedule, the project will be launched on time," said first Deputy Chairman of the state Duma Committee on energy Igor Ananskikh. The head of Gazprom, Alexei Miller, also confirmed that Nord stream 2 will be implemented, despite threats from the United States.

"In Warsaw, do not know what to think, just to disrupt the “Nord stream-2”. Now the Prime Minister of Poland scares the military campaign of Moscow to Kiev after the project. Like, how to build, so the war against Ukraine will begin."- Pushkov wrote in his microblog on Twitter.

Earlier on Sunday, November 18, Prime Minister of Poland Mateusz Morawiecki said that Russia may launch an offensive in Ukraine, after starting the "Nord stream - 2", as the Ukrainian gas transportation system will stop playing for Moscow "so important".