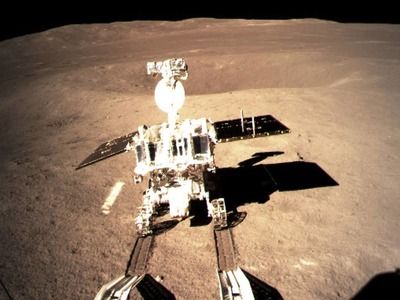 Science and engineeringEventsResearch and developmentSpace transportation
OREANDA-NEWS. The Chinese lunar rover, Yuuta-2, found iron-rich minerals on the back of the moon, the study of which will shed light on the history of the formation of the Earth and its only natural satellite, according to the journal Nature.

The moon consists of the crust, upper mantle, middle mantle, lower mantle and core. The mantle diameter of the natural satellite of the Earth is 80% of its diameter, it consists mainly of rocks. It is assumed that the mantle should contain more heavy elements, in particular iron and manganese, but scientists do not have a complete understanding of the formation of the lunar mantle. “Surprisingly, neither Apollo nor Soviet probes delivered a single sample of the lunar mantle to Earth. Yuytu-2 received the first data on its composition, landing in a crater at the bottom of the South Pole-Aitken basin, where, as shown measurements of NASA probes, could be hidden deep rocks of the bowels of the moon ", - commented the discovery of a planetologist from the University of Toulouse Patrick Pigne.

The development of the lunar program of the PRC began in 1998 and was approved in January 2004 under the name of the Chang'e Program in honor of the Chinese goddess of the Moon. Cameras, an infrared spectrometer, a georadar, a low-frequency spectrometer, a device for studying the effects of the solar wind on the lunar surface and a neutron dosimeter are installed on the Chang'e-4 spacecraft.

On the morning of January 3, 2019, the apparatus made the first soft landing in history on the far side of the moon - in Karman crater, in the northwestern part of the largest known lunar crater South Pole Basin - Aitken. In order to maintain working capacity for further experiments, due to the extremely low temperatures on the far side of the moon, during the night period, Chang'e-3 and the moonwalker Yuyu-2 enter sleep mode.