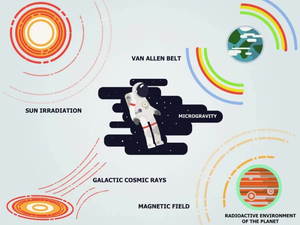 Everything You Need to Know About Cosmic Radiation

Science and engineeringResearch and developmentTechnical testings, researches and certificationsMedicine
OREANDA-NEWS Outer space, as it is known, is a harsh environment. There is no air, almost no gravity (microgravity does not count). In addition, it is very cold in space, and there is also an invisible danger in the form of solar radiation. As it is known, radiation exposure can cause the development of a number of serious diseases, including cancer. It is believed that solar radiation in this regard poses a great danger to astronauts and is a big problem for long-distance space travel. But it is not so clear.

Space travel exposes the body to higher doses of ionizing radiation than those normally found on Earth, since the atmosphere of our planet detains most of these dangerous particles. In space, as you understand, there is no such protection and it is believed that at high doses, cosmic radiation can cause diseases of the heart, the broncho-pulmonary system and lead to the already mentioned problems with immunity and an increased risk of developing oncology.

However, the results of the new study bring us good news: space radiation does not seem to increase the risk of astronaut death from cancer or heart disease, at least not in the doses they received during their missions.

However, longer missions (such as the mission to Mars) will obviously expose astronauts to much greater radiation exposure, which may already pose a risk to human health.