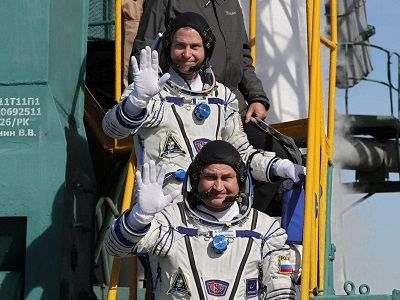 NASA: Nick Hague and Alexey Ovchinin are Preparing for Return to Moscow after Soyuz Launch Incident

OREANDA-NEWS  On NASA's official Twitter page, Rescuers have already arrived at the landing site of the crew in Kazakhstan. The latest publication says:

« Nick Hague and cosmonaut Alexey Ovchinin landed safely on Earth after a booster on their Soyuz rocket failed earlier. They are reported in good condition. Search and rescue crews are with them and preparing them for a return to Moscow.»

The emergency capsule with the crew of Soyuz MS-10 successfully landed. Russian cosmonaut Alexei Ovchinin and NASA astronaut Nick Hague are alive and in touch. This was announced by the head of Roscosmos Dmitry Rogozin.

Roscosmos reported that the cosmonaut and astronaut made a successful landing in Kazakhstan.

Earlier it became known that when launching the carrier rocket with the manned spacecraft Soyuz MS-10 from the Baikonur cosmodrome in Kazakhstan, an accident occurred. The rocket was launched at 11: 40 Moscow time, nine minutes later, the announcer reported the accident carrier.

In addition to the new space station crew, consisting Ovchinin and Hague, the ship was supposed to deliver to the ISS the cargo.

According to some reports, the accident occurred on the 119th second of the flight when separating the side blocks of the first stage from the Central block of the second stage of the launch vehicle. Then the emergency beacon worked, the ship was divided into compartments and released the parachute

In his Twitter, the head of Roscosmos also noted that the rescue services are working from the first second of the accident. In addition, he said that you have already created a state Commission to investigate the causes of the accident. "She has already started to work. Telemetry is being studied, " Rogozin wrote.

To search for the astronaut and cosmonaut flew rescue helicopters Mi-8 from the airfields of Zhezkazgan, Baikonur and Karaganda, reports TASS with reference to the press service of the Central military district.
Source: OREANDA-NEWS
Материалы по теме: