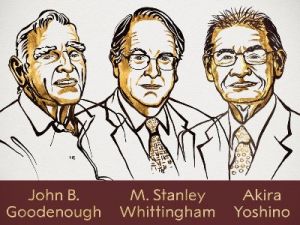 OREANDA-NEWS. In Stockholm, Nobel laureates for chemistry research were announced. This year, three scientists were awarded: John B. Goodenough (Germany), M. Stanley Whittingham (Great Britain) and Akira Yoshino (Japan). The prize was awarded for the development of lithium-ion batteries.

“Lithium-ion batteries have revolutionised our lives and are used in everything from mobile phones to laptops and electric vehicles. Through their work, this year’s Chemistry Laureates have laid the foundation of a wireless, fossil fuel-free society,” the Nobel Committee wrote on Twitter.

The principle of operation of lithium-ion batteries is based on oxidation reactions of lithium metal, which is part of the anode (positive electrode). During discharge, the metal is oxidized and in the form of cations (positively charged ions) moves to the cathode (negative electrode). When charging, the reverse process occurs. Lithium batteries are lighter and safer than accumulators which were used before. This type of battery can be recharged a little regularly without fear of spoiling.

In the 1970s, Whittingham developed a prototype of the first functional lithium battery. The British scientist studied superconducting materials and found among them an extremely energy-intensive metal, lithium.

Goodenough predicted that the cathode would have even greater potential if oxide is used instead of lithium sulfide. In 1980, he demonstrated that cobalt oxide with intercalated lithium ions can produce up to 4 volts.

In 1985, Yoshino created the first commercial lithium-ion battery. Instead of using lithium in the anode, he used petroleum coke, a carbon material that can also intercalate lithium ions. The Japanese researcher finally invented a light wear-resistant battery that can be charged hundreds of times.