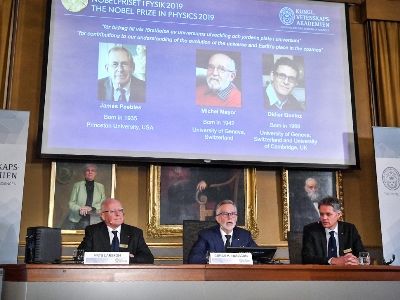 OREANDA-NEWS. The 2019 Nobel Prize in physics was received by James Peebles from Canada, Didier Queloz and Michel Mayor from Switzerland. Peebles got a prize “for theoretical discoveries in physical cosmology.” Swiss scientist became winners “for the discovery of an exoplanet orbiting a solar-type star.”

Peebles, Albert Einstein Professor of Science Emeritus at Princeton University, devoted more than two decades to developing a theory that became the basis of a modern understanding of the history of the Universe, the Nobel Committee noted. In particular, he worked on the Big Bang model. In the last century, Peebles gained fame not only as a researcher of the Universe, but also as an author of popular book “The Large Scale Structure of the Universe” which was published in 1980.

Queloz and Mayor were searching for new worlds in our galaxy. In 1995, they discovered the first planet outside Solar System orbiting the star 51 Pegasi (Helvetios). Their discovery was the beginning of a revolution in astronomy. Over the past time more than 4 thousand exoplanets have been discovered in the Milky Way galaxy.

The sum of the Nobel Prize is 9 million Swedish kronor (about 918 thousand US dollars). Half of the award goes to Peebles, the other to Queloz and Mayor.

Last year, the Nobel Prize in physics was received by Arthur Ashkin from USA who invented optical tweezers, and Gerard Mourou from France and Donna Strickland from Canada who became laureates for inventing the method of generating high intensity ultrashort optical pulses.